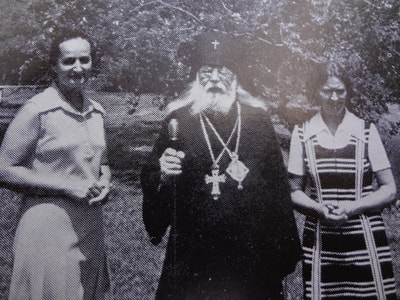 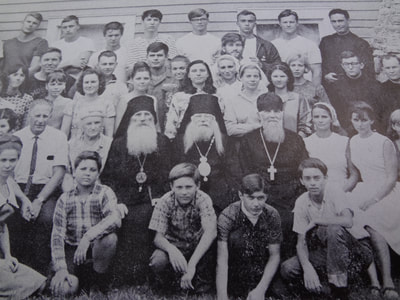 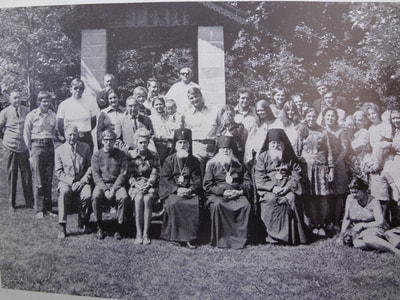 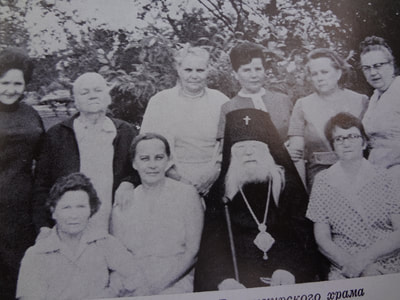 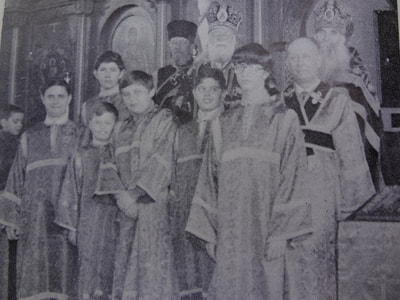 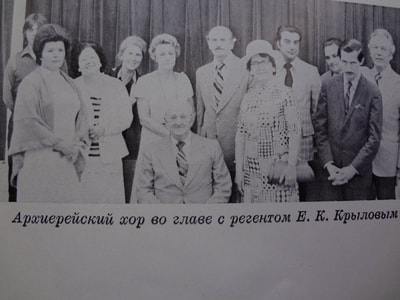 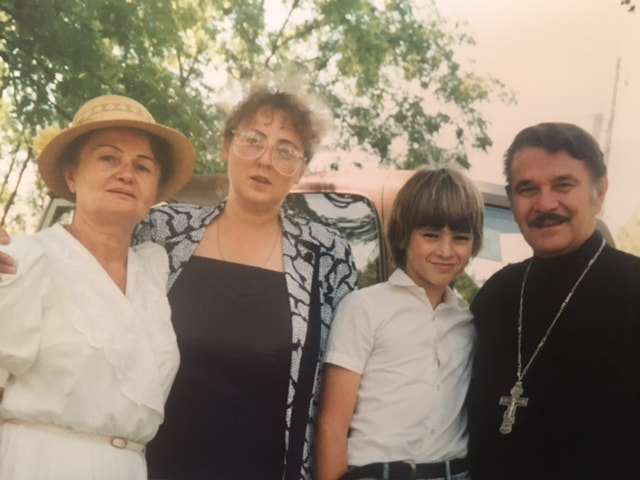 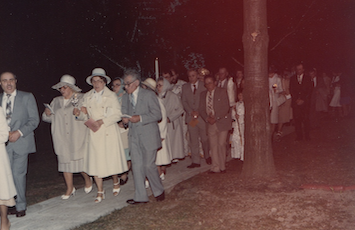 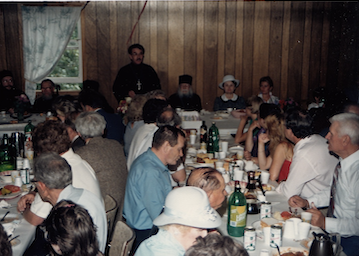 NIKOLAI GLADKIN
He was a member of St. Vladimir Russian Orthodox Church of Lost Lake for a long time as well as a churchwarden. He worked very hard for the church. He was born on Jan. 7, 1922, in Kursk, Russia. In 1954, he and Antonia were united in marriage in Chicago.
He had three sons, Peter Gladkin of Palm Springs, CA, Vladimir “Walter” Gladkin of Davis and Victor Gladkin of Elgin; and several grandchildren and great-grandchildren.

Nikolai Gladkin, 90, went to God on May 14, 2012.
SOPHIA M. MICHAJEWICZ
A longtime member of St. Vladimir Orthodox Church, the former treasurer and a member of the Sisterhood. Born May 1, 1937, in Owzychy, Ukraine, daughter of John and Tekla (Buzuk) Michajewicz. She arrived in the United States in 1949, moved to Rockford in 1950, and graduated from East High School in 1957. Sophia began her banking career at American National Bank in 1956. She briefly worked in Los Angeles, and later returned to Rockford and worked for First of America Group until retirement in 1995. Sophia M. Michajewicz, 72, died on July 20, 2009, in her home, surrounded by her family and friend, after a courageous battle with cancer. 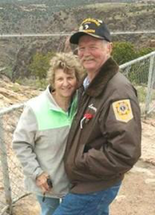 Valerio "Larry" and Lydia Korsh
LYDIA KORSH
She was born November 13, 1947, in Bobingen, Germany to Iwan and Selma (Hauff) Suchobrus. In July 1970, she married Valerio "Larry" Korsh and shared 45 years together while raising their 4 children. Lydia worked as rural postal carrier for the U.S. Post Office for 30 years. She was a member of the Roscoe Ladies Auxiliary and the sisterhood of St. Vladimir's Russian Orthodox Church in Rock City. Lydia enjoyed quilting and made a career of loving and caring for her family, cooking lots of food and entertaining family and many friends. Together with her husband Larry, they danced, traveled, cared for their farm and animals and embraced the love of their children and grandchildren.
Lydia Korsh, 67, passed away along with her husband Larry on Monday, October 12, 2015.
Lost Lake Vladimirovo Village
According to “Journal Standart” by Harriett Gustason August 01,2008 and “Chicago Reader” by Gram Pick June 03, 1993 )
​Saint Vladimir's is the center of the Lost Lake community, or Vladimirovo, as it's also called. The community consists of the church, the lake, a summer camp, and a subdivision of about 15 small houses. To the casual observer, the city tourist who happens upon it on the way to Galena or the Wisconsin Dells, Lost Lake seems a mystery, a sniff of the ancient and the foreign set inexplicably amid the cornfields. But to the people who live and worship here it is a haven of comfort and familiarity. "This is a little bit of home," says Sophia Michajewicz, a Rockford banker who serves as the church treasurer. "It's what I picture a village back home is like--not big, but a place where everybody helps each other."

The Lost Lake subdivision, which covers about 50 of the community's 80 acres, is governed by an association that collects modest dues from the residents, money it has used to coat the gravel streets with oil (to keep the dust down) and to erect green street signs that bear the names of Russian cultural and political heroes of the past--writer Aleksandr Pushkin, composer Peter Tchaikovsky, and Igor Sikorsky, the inventor of the helicopter, who fled Russia after the revolution that brought the communists to power in 1917.
The first permanent resident of Vladimirovo was F. Schubin, a Russian immigrant and former resident of Chicago. Others who followed were George Gesvent, a resident of Freeport who worked at Micro Switch. He served as vice president of the Vladimir Cultural Association. There were Rangelovs, Hantels and Gladkins. Several generations of Hantels bought one-acre lots and according to Garard, these acres are still owned by Hantel descendants. Descendants of some of the other founding families still live in Vladimirovo and the surrounding area.

Nikolai Gladkin  grew up in a village near Kursk Russia, the son of a farmer. In time he moved to Chicago. He met his wife Antonina, a native of Saint Petersburg and a widow with a young son, at Saint George Orthodox Cathedral on North Wood Street. Gladkin, by now a drill press operator, bought a house in North Lawndale and had three sons with Antonina; they became members of the Holy Virgin Protection Cathedral, led by Seraphim Ivanov, the Chicago archbishop of the Church Abroad.
When Seraphim established Lost Lake in the early 1960s, the Gladkins bought a lot there and built a garage that they used as a summer getaway. In 1968, as the last whites fled Lawndale after the riots attending the death of Martin Luther King, the Gladkins took up permanent residence at Vladimirovo, enlarging their summer place by combining it with a mobile home. Both adults, like so many who moved to Lost Lake at the time, found work at Micro Switch, a manufacturer of switches and sensors located in Freeport.
Nick Gladkin, now in his mid-70s, loves Vladimirovo for the chance it gave him to own a full acre of land. Other residents seem to share his plain affection. Lucy Zavolokoff, the president of the Saint Vladimir's sisterhood, finds comfort in the simple social life. "You visit your neighbors, and your neighbors visit you," she says. Nilij Garmasch, a retired body-shop worker from Humboldt Park, praises the place in a thick accent that recalls his youth in the Ukraine. "It's country. Very quiet. No traffic. The church and the little lake. Clean air. Good people all around."
The residents' hostility to the state of life in the former Soviet Union bears on their choice of a religious denomination. The Russian Orthodox Church Abroad is distinguished from the Russian Orthodox Church of Moscow by its refusal since the time of the revolution to accept domination by the communist government. The Church Abroad, originally called the Russian Orthodox Church Outside Russia, reveres the Romanovs, the old royal family, as martyrs and has canonized them.
Likewise the Church Abroad is distinguished from the more liberal Orthodox Churches in America by its hidebound adherence to ancient customs--for example the Slavonic services, standing during prayer, and the hierarchical respect followers are supposed to accord the priest and the father of each family. The Church Abroad follows the old Julian calendar rather than the modern Gregorian, so that Christmas and Easter, for instance, occur later for it than they do for other Christian denominations. The women, under centuries-old strictures, are not allowed to wear pants in church and are supposed to cover their heads. After a woman has a baby, she is not to appear again for services until her child has been christened.
John Sykaluk, on weekdays a Rockford machinist, functions as Saint Vladimir's parish priest, and he is not the stickler he should be about all the rules. Some women can be seen in church lacking a scarf or hat. "Most of the old people who come to church prefer the services to be in Russian," Sykaluk says. "But when I see young people I put in a little English. Some people tell me the incense bothers them, so I try not to use too much."

In 1970 11 families, the Gladkins and others, had moved permanently to Lost Lake. The adults found employment in Freeport and the children, largely teenagers, went to school in nearby Dakota.

Since 1960 70s-era kids grew to love Vladimirovo. Compared to North Lawndale, says Walt Gladkin, the unfettered life-style of Lost Lake was a welcome change. "I liked the freedom, and still do," he says. "Where else can you sit around and hear the birds, go fishing, and toboggan in winter
By 1974, there were 30 permanent residences established on the eastern
side of the lake. These 30 homes have continued to be the nucleus of community life. Original builders of some of these homes still reside in them. The homes are passed down from generation to generation. 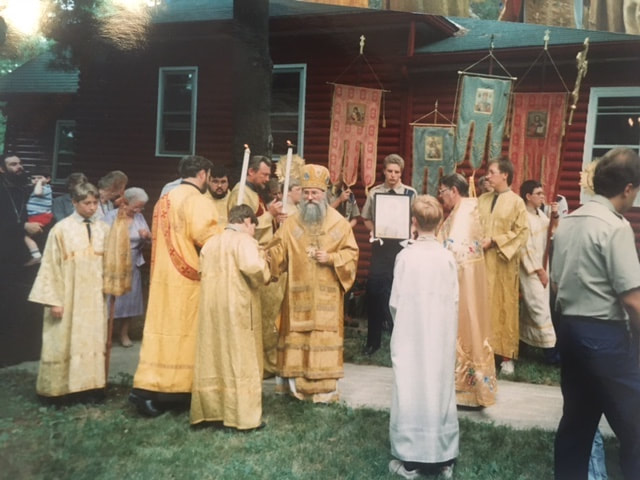 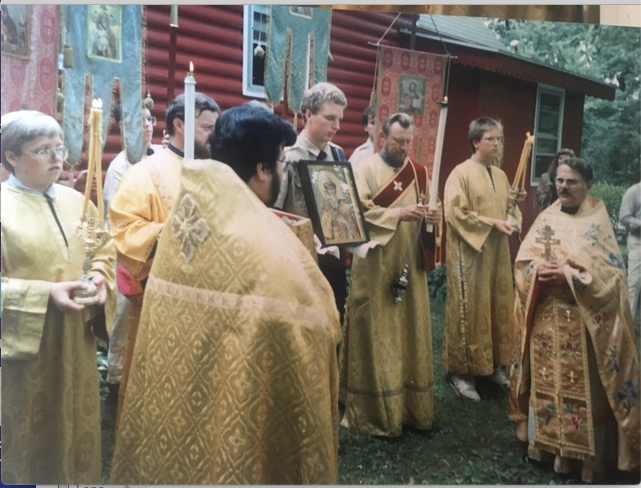 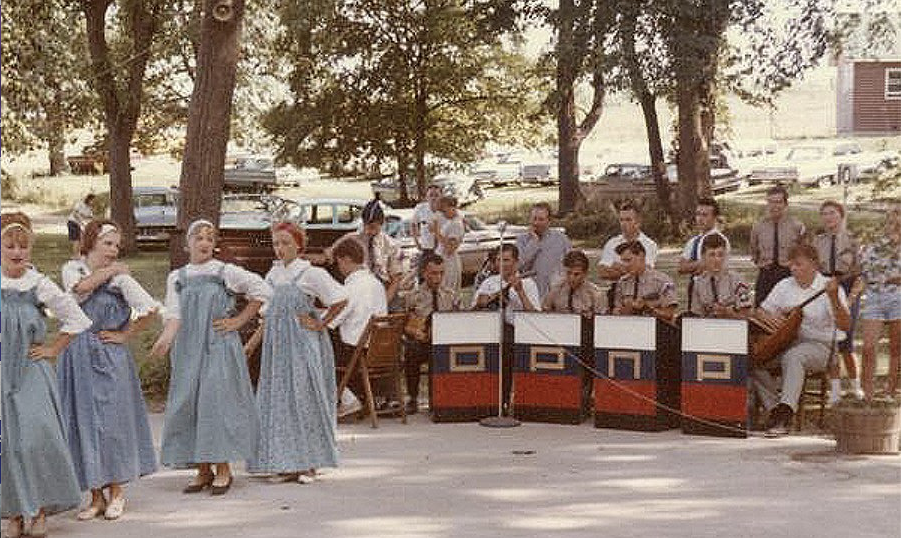 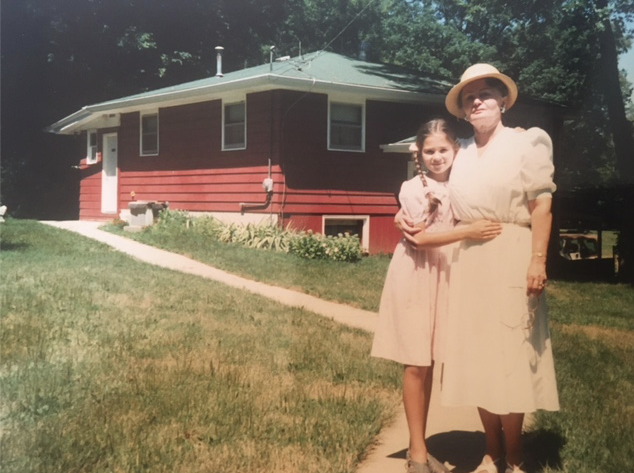 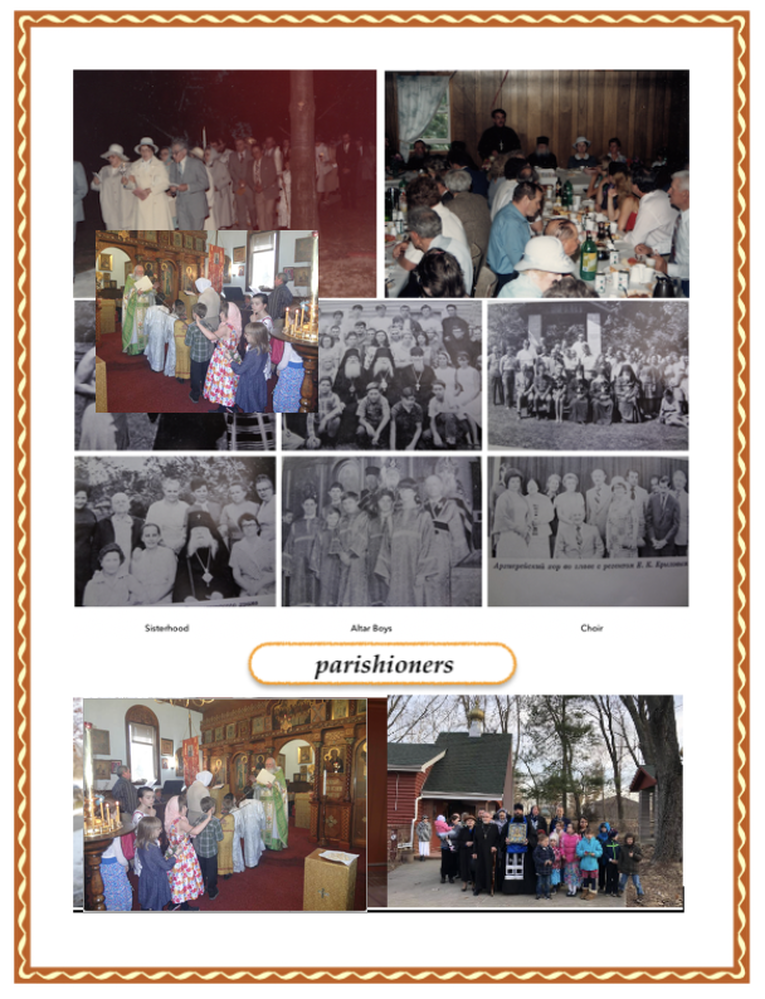 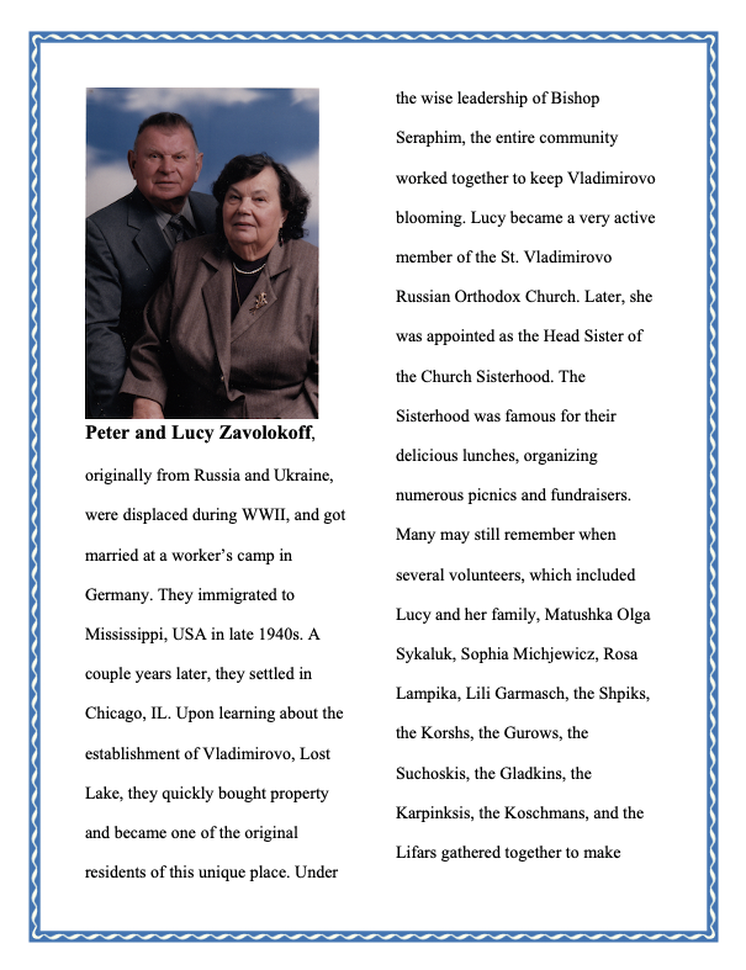 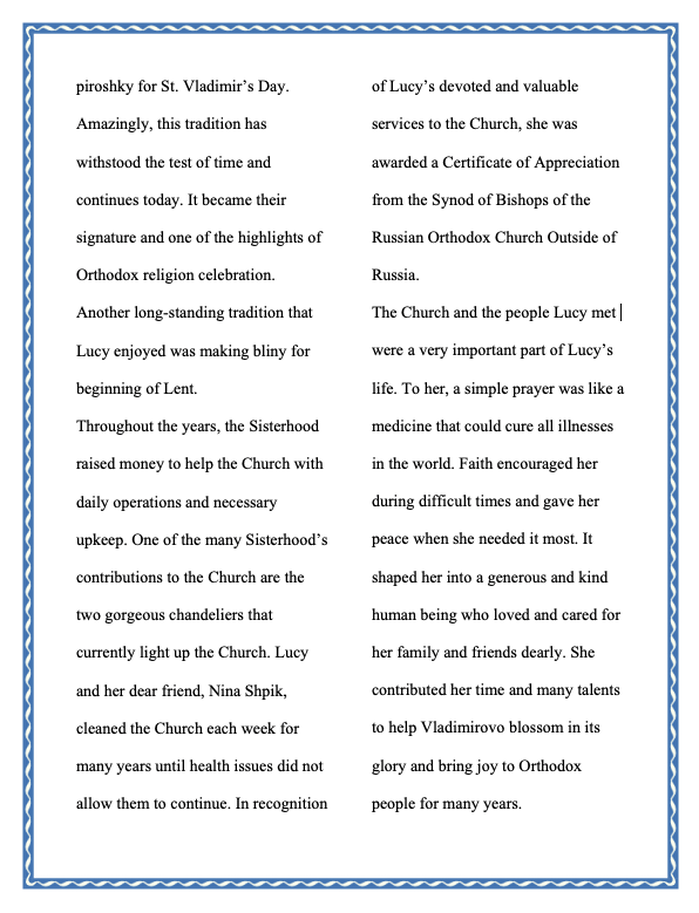 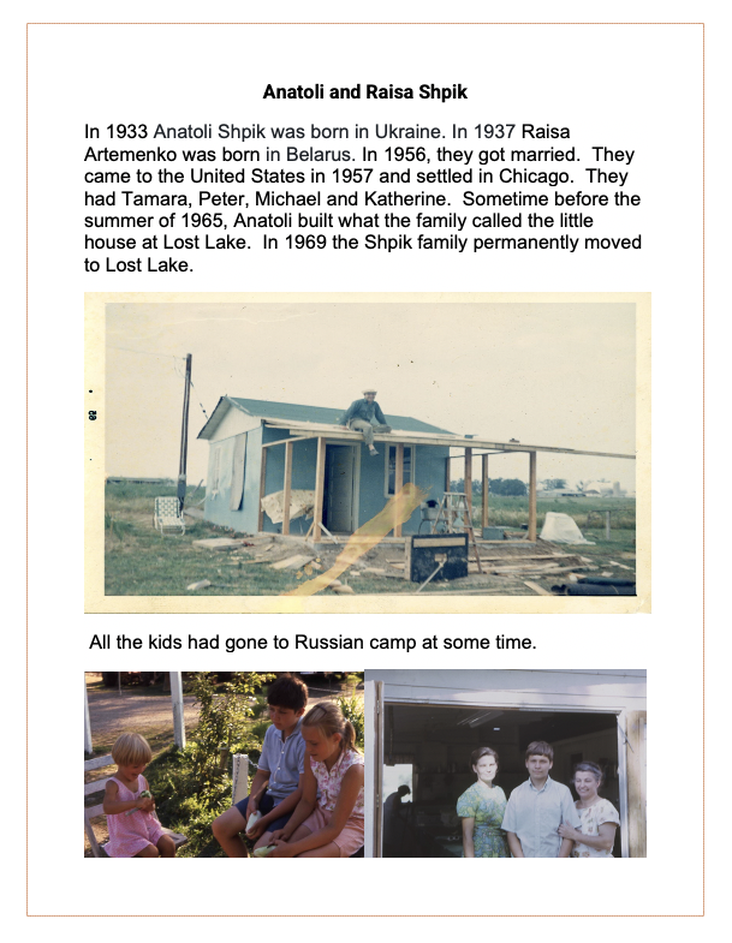 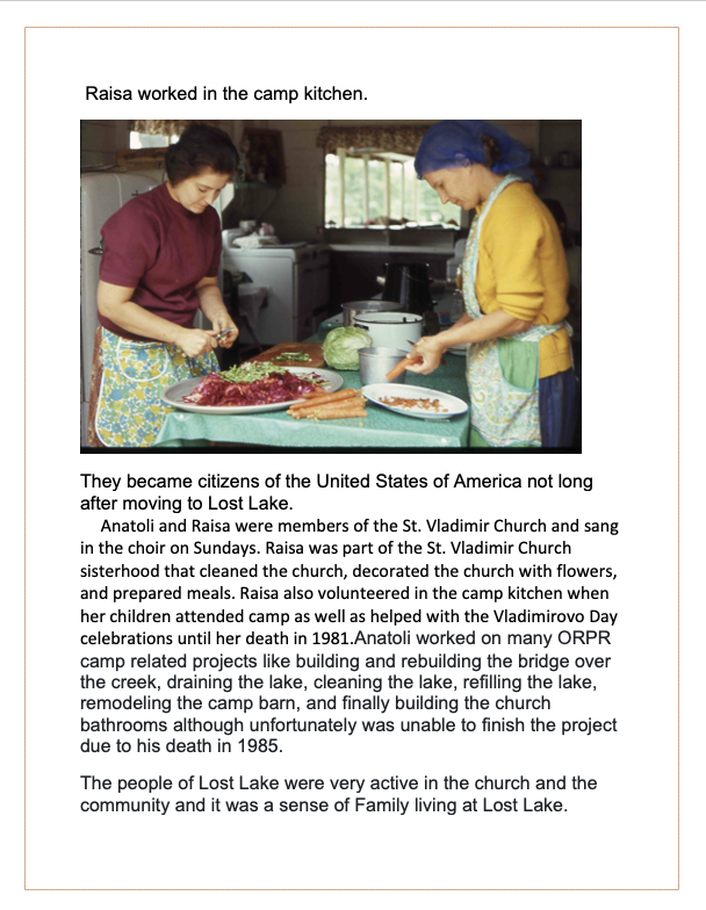 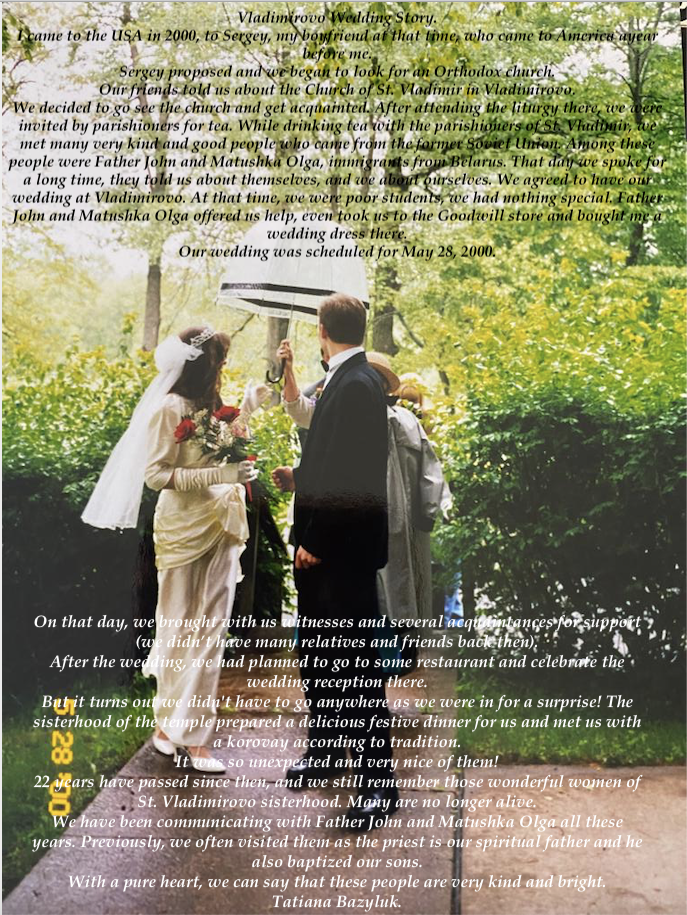