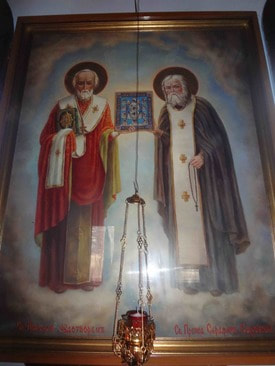 The history of this unique place and God-given church, began in the late 60s, when Bishop Serafim, who always loved children, conceived the idea of creating a youth organization and a children's summer camp in his diocese.

In May 1961 Yuri Soldatov and Bishop Seraphim set off to find a place for a summer Orthodox camp for children. After inspecting several sites and not finding anything suitable for this, they decided to return home. As they were turning back, all of a sudden, they saw a farm with a beautiful lake with some woods surrounding it and a "for sale" sign. It turned out to be a farm of about 70 acres of land, including a 4-acre lake and a 3-acre woodland.

On the following Sunday, the Bishop announced at the Holy Virgin Protection Cathedral that there would be a picnic for the inspection of the farm.
The farm had a field of 50 acres, which was divided into 50 lots.
The parishioners liked the picturesque place and many invested money for the purchase of lots. Prince S. Beloselskiy also helped significantly in the acquisition of land. This was the beginning of the Russian settlement of Vladimirovo and the youth camp of the ORPR.

In the summer of 1961 the camp was opened. During the camp, divine liturgies were performed in the open air. A church was needed.
And then the Miracle happened! In the spring of 1962 Nikolay and Ekaterina Kovalenko came to Bishop Seraphim and said the following:

R.B. Nikolay suffered greatly from headaches and constant bleeding from the nose. Doctors could not help. At this time, a  wonderworking Kursk-Root Icon of the Mother of God arrived in Chicago. Both spouses went to the cathedral in the evening for Divine Liturgy. They diligently prayed on their knees to the Queen of Heaven all service long.
Upon his return home, Nikolay saw a wonderful dream:
He saw the Kursk-Miraculous image of the Virgin, as if hanging in the air, and under it stood the Saints, especially honored Russia - St. Nicholas the Wonderworker and the Holy Monk Seraphim of Sarov. The latter takes an icon from the air and gives the heavenly patron of Nikolay to St. Nicholas the Wonderworker. St. Nicholas passes the icon to Nikolay. Nikolay touches the Icon and feels that as if an electric current runs through his body. When Nikolay Kovalenko woke up, he felt completely healthy.

Soon there was a second dream:
A old monk appeared to him in his monastery clothes with a long gray beard and said: "The Mother of God has healed you and you must build a church."
In the third dream, the same monk already strictly warned him: "You are told to build a church. If you do not obey, then the disease will return. "
Then Nikolay decided to go to Bishop Seraphim to consult and said that he was ready to give all his little savings to the construction of the  church.

So according to God's providence, in spring of that year the work to build a holy  church began.
​
The church was built without any outside assistance and in 3-4 weeks the church was ready. Protodeacon John made a carved iconostasis and icon cases (kiots).

The church was built in honor of the Baptist of Russia, Saint Vladimir the Great.

And Nikolai Kovalenko became the churchwarden  the church.

In the middle of the 60s the spouses Geshvent, Georgy and Melissa moved to Vladimirovo. Georgy became an active assistant to Bishop Seraphim. After his death, he bequeathed to open the Parish School for the Glory of God.
Help us Lord, Mother of God and all the Holy patrons. 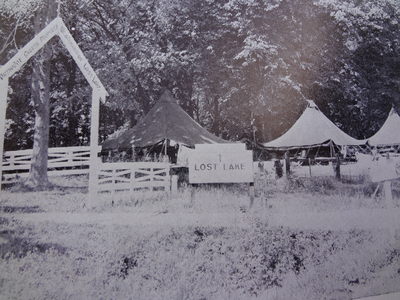 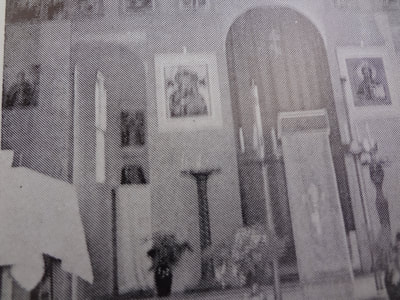 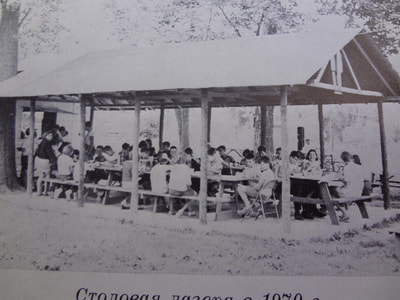 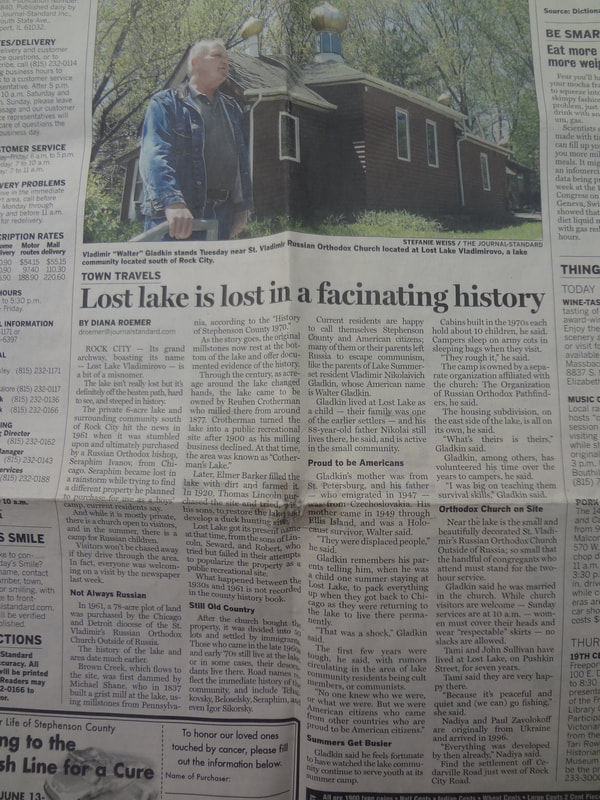 
(According to earlier research done by Journal-Standard reporter Diana Roemer, the lake first existed in 1837 when Michael Shane dammed up Brown Creek to build a grist mill. The land changed hands and Reuben Cotherman milled there from about 1877 until his business declined. Around 1900 he turned the lake into a public recreational area. A later owner, Elmer Barker, filled in the lake and farmed it until 1920 when Thomas Lincoln purchased the site and tried with his sons to restore the lake and develop a duck-hunting site. Lincoln and his sons were apparently the ones who attached the name “Lost Lake.” The years between 1930 and 1961 are unaccounted for.)
​
St. Vladimir Constructed
The first thing the new landowners built, in keeping with Bishop Serafim’s wishes, was the tiny church, St. Vladimir. It was constructed on the west side of the lake where it could serve the intended summer camp. It was built in less than four weeks.
It was built in the typical Orthodox style and is topped with a miniature onion-shaped dome. Bishop Alpy, later to become an archbishop, lay on his back on scaffolding and painted the ceiling frescos for 10 hours at a time ... at age 72. A deacon from the diocese created the wooden handiwork and carved frames. Other sacred decorations are added every year through parishioners’ donations. Sometime throughout the years the church building had an extension added at the rear.
The church is named for St. Vladimir, the one who brought Orthodox Christianity to Russia from Byzantium in the year 987 A.D. “Their faith and cultural heritage took precedence above all else,” Garard wrote.

Pascha
A Place Out of Time
These Parts: Rock City, IL--To the traveler who happens upon it, the Russian Orthodox Community of Lost Lake seems a mystery, a touch of the ancient and the foreign set inexplicably among the cornfields. But to those who live and worship there it is a have
By Grant Pick

The sky is clear and cold as midnight approaches in the rolling farmland northeast of Freeport. It's a Saturday night in mid-April, and as windows go dark in the farmhouses people are just beginning to gather at Saint Vladimir Russian Orthodox Church.
Here near the hamlet of Rock City, an area that's heavily Lutheran and Methodist, Saint Vladimir's is a strikingly exotic place of worship. It's a redwood Byzantine structure, onion domes and all, set amid a stand of trees 50 yards back from a man-made lake. Here members of the Russian Orthodox Church Abroad, a branch of orthodoxy still loyal to the czars, are filing inside to celebrate Easter with a lengthy double mass, conducted almost entirely in Old Church Slavonic, a liturgical language dating from the 12th century.
About 50 parishioners, many aged immigrants from the former Soviet Union, enter the dimly lit church and take their places in back. The oldest members of the congregation sit on benches near the windows, but most people stand, as Saint Vladimir's has no pews. At the front of the church is an elaborate wall of carved wood, hung with icons of Jesus, the apostles, and various saints. Beyond the icon wall, nearly hidden behind a set of swinging doors, is the altar, where Father John Sykaluk will preside through much of the service.
As the observance begins Sykaluk, a heavily bearded man dressed in a gold and black cassock, swings a censer back and forth, spreading clouds of incense over the congregation. Then a group of men helps him conduct a Bible and a statue of Jesus with its face covered, representing the Savior's grave, back to the altar. As Sykaluk makes his way, a small choir chants a song.
At midnight the priest emerges through the altar doors, dressed now in white to symbolize the risen Christ. As the bells peal in the darkness, he leads the congregation out the church's door clutching a ring of candles and lilies and singing "Christ is risen" in Slavonic. The choir answers him. Ordinarily the faithful would walk around the church three times--signifying the Father, the Son, and the Holy Ghost--but the grass has been freshly planted and no one wants to trample it. Sykaluk distributes more incense, and finally leads the worshipers back inside the church, where altar boys have replaced the black cloth that had draped every surface with white.
The Easter service lasts long into the night. By 3:30 AM, when Sykaluk blesses baskets of cheese, eggs, and sausage--food prohibited during Lent--for a celebratory breakfast in the church hall, two dozen diehards are still participating. But then this is a church of diehards.